I will properly translate these novels someday, until then 5 chapter teaser for you!

Kanzaki Misuzu, 22 years old, a female college student. She had decided her place of employment and she would soon graduate. One day in the winter she was dragged by arms that sprouted out from a black fog, into another world. A frail girl who had been raised in the city and couldn’t even kill a bug. Fortunately it seemed she could use magic. She made free use of spell she memorized from games, and somehow made a living in that place. These were her story. And there would be no Reverse H.

This is the original webnovel version (end in Story 72). Someday I'll translate the LN (5 Books).


This project has now officially performed (and retranslated) by Project Accelerator.

Jui-san no Oshigoto in Isekai
獣医さんのお仕事 in  異世界
A Veterinarian in Another World
Author： Choko Aozora 蒼空チョコ
RAW Source: HERE 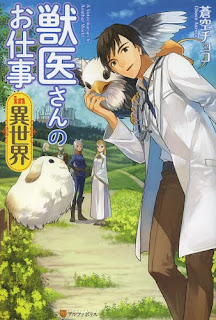 Dragged by the quarrel between brother of a count of a certain remote region. was summoned into another world. The purpose for that summoning was “to make the territory prosperous”. To sum it up, it the typical summoned into another world thingy ---- so was what Kazami thought at the time.
「But, I only a mere veterinarian.」
However, never underestimate a fantasy another world. This world had dragons, monsters, and many races. The difference of language, magic, food, religion, common sense and many other aspects from earth were also endless.
Even so, the veterinarian become a public servant and for the time being perform autopsy, medicine making, and improving agriculture.


Not as a hero, not as a doctor, but as a veterinarian, and this is the story of how he do his best in making this another world as his new house.

Description:
Izumi Maya (A 33 year old professional pastry chef), who went out to buy some mustard, got caught in an accident - when she had regained her awareness, she had reincarnated as a 12 year old princess!
Besides, she also had an husband who was older than her! (A king moreover)
Maya who seem to have realize that she had arrived in a place where her life would be targeted decides to try to get along with her husband to protect herself!
In the name of being a pastry chef, I'll defeat the criminal and my husband's stomach at the same time!!

Just send your email to (with subject: subscription):
preprowriter@gmail.com
and I send you an email if I post something.
In case you didn't receive any email. Resend your email. Must be something wrong with the script.
My Discord Channel
https://discord.gg/rjM9M5b
Sorry, my blog lack sophistication....
You can meet me (mostly live) at:
novelupdates

Monthly Progress:
Please consult this post for further information.
Internet Fund:
Fund status: Not using anything to buy LN.
If I got 1000$ a month from Patreon, I quit my GP job... LoL

Still hoping the Laptop Thief receive Divine Punishment! (it soon be one year anniversary since the Thief stole my laptop.)
I wish money or food can just fall from the sky.....
Also if you translate into another language please tell me so I can link your site to my blog ^^